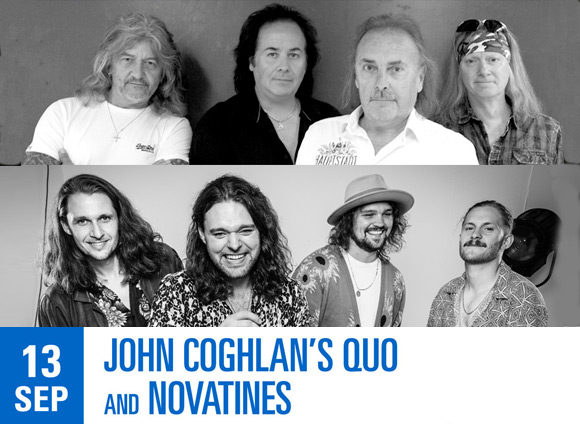 The prime aim of John Coghlan’s Quo is to recreate an authentic “70’s Quo Sound” in keeping with John’s time with Quo. For Quo fans and critics alike, this time is often regarded as Quo’s “Classic” period.

During the late nineties John Coghlan’s Quo was formed and through various line-ups has enjoyed regular gigs all over the UK and Europe. The current band consists of John on drums, with Mick Hughes on guitar and vocals, Rick Chase on bass and vocals, and Pete Mace on guitar and vocals completing the line-up.

Novatines are a 4 piece rock band who formed in the winter of 2017. The band immediately made a name for themselves on the UK circuit with their anthemic, high-octane set. Novatines have toured extensively throughout the UK and Europe on both headline and support tours, playing alongside the likes of Alabama 3, Arcane Roots, Von Hertzen Brothers, and Sweet.

Join our mail list to get news of upcoming events at The Kings Arms. We have small outdoor music events, car and dog shows, chilli cook offs as well as the famous Concert at the Kings.

Take a look at the range of takeaway food and drinks available to order online.

Currently unavailable due to Covid-19 restrictions.

Send us a message about booking a pitch at our Caravan & Motorhome Certificated site.

Please note, Pizza Pop Up can be arranged for a later time by pre arrangement